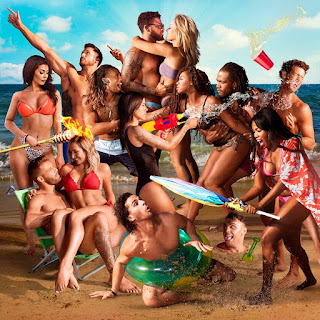 Six years ago this month, the world of MTV Reality was turned on its head: a future Challenge champ got to welcome six strangers to her adopted Bay Area backyard for a Real World season that anything but typical once their exes came by for Ex-Plosion. A week or so later, the 2014 year in Teen Mom began with just the TM2 cast taking center stage when Kailyn Lowry gave birth to the second of her three kids and tied the knot to Javi Marroquin. And then, the second show to land the coveted spot of airing after the baby mama drama debuted when Are You The One premiered, MTV's first foray into 2010's dating television.

It was after the season finales of those three shows aired in the spring of 2014 that, without those in the United States ever knowing about it, a show that took the twisted concept of the first of what would be five different MTV shows Cory Wharton would be on to new heights, Ex On The Beach debuted on MTV's British channel and its affiliated networks in non-American territories. It was the beachy version of what he had to go through in the City by the Bay: the ex girlfriends & boyfriends of the singles coming in to wreck their summer vacation, and it has been a staple of MTV UK for five years, expanding to many other countries in the years following.

It was only a few years later that those in the U.S. would discover what this show would be all about, just as MTV in America began to once again become relevant in a newly changed media landscape. And with its most notable couple just announcing the next phase in their relationship, as well as its most explosive character giving us one of the biggest MTV moments of 2019 that didn't even air on the cable channel itself, we at DCBLOG felt like giving Season 1 of Ex On The Beach U.S. a second look... but in a totally different and twisted way than you've ever seen, or heard.

A few years after Ex On The Beach debuted across the pond, MTV began to plot a new course of focusing on its calling card of unscripted shows that made the channel famous. The channel and its new head Chris McCarthy took a second look into a collection of intellectual property unparalleled in the cable universe and brought back some old favorites, as well as looking overseas at European-originated reality formats that could work well in this prestigious market.
Chris and his team rung up their MTV International cousins about making an American version of EOTB, and with the help of original producers Whizz Kid Entertainment in the UK and parent company Entertainment One (which also co-produces Siesta Key, The Rookie featuring future Season 3 single Cameron Armstrong, and was recently acquired by toy company Hasbro partly due to the appeal of preschool hit Peppa Pig), they enlisted the team who have done several shows for Bravo, Purveyors of Pop, to produce our version of Ex here.
An article from World Screen and an interview with Viacom's international team notes the show sticks to the principals of its original UK format, but the U.S. version is structured a bit differently. While the famous entrances of the exes on the Beach of Doom are the same as is the infamous Tablet of Terror, our version added an on-screen host in Romeo Miller, brought the Shack of Secrets from an social media extra on the U.K. show to where the exes come to see those dreaded receipts, and the Cut or Crush elimination that's standard on most other reality shows.
And mirroring the same strategy that's seen Teen Mom launch Siesta, Floribama Shore, Catfish and Are You The One out of it, Season 1 was given the launch spot of airing after the relaunch of Jersey Shore and its Family Vacation... and thanks to something called Nielsen numbers, many people stuck around and were fascinated by what they saw that they finally had a chance to see what those across the pond have been raving about. And along with this, four UK alumni from the British series competed on The Challenge Vendettas in the run-up to the premiere of Ex U.S.

Across its first three seasons and the current Peak of Love, big names like Aubrey O'Day and Farrah Abraham have been on EOTB as are some of MTV Reality's most familiar faces, and two British stars in Georgia Steel & Callum Izzard. And MTV UK has taken note of the U.S. version casting reality stars for its EOTB by launching a celebrity version of Ex this week across the pond, with 2-time Challenger and Love Island alum Georgia Harrison among its cast of singles. And some notable EOTB alumni have made plenty of waves, including two just last weekend...
♥ Taylor Selfridge and Cory Wharton met in Hawaii when they were singles in the house, then became a couple afterwards and last week invited fellow MTV'ers to their baby gender reveal party in L.A. to celebrate a new girl, including fellow OG Paulie Calafiore who became a Challenge villain when he made Cara Maria Sorbello his perfect match.
♥ Angela Babicz was the first single to enter the house, then became the first two-time single when she returned for Season 2 where, after she confronted the ex she met the previous season in Tor'i Brooks, met her boyfriend & Cory's fellow Challenger Nelson Thomas - and both appeared on a 2-part session of couples' therapy on Dr. Phil last fall.
♥ Faith Stowers joined Angela, Cory, Nelson and Paulie on the ensuing season of The Challenge Final Reckoning after EOTB1 aired in the second half of 2018, and last year announced that she was pregnant - the first alum from her original show Vanderpump Rules to become a parent and who beat all of the show's original six SUR workers to that title.
♥ Bachelorette 2016 alum Chase McNary returned to Bachelor in Paradise last year, one of three suitors from Jojo Fletcher's cast to go onto EOTB (Chad Johnson and Daniel Maguire the others), and a fourth to go on MTV after Siesta Key welcomed to its cast Robby Hayes, whose Rebella firm has seen him work not only with Juliette Porter & Kelsey Owens, but also with EOTB UK alum turned Challenger Joss Mooney and Season 2 single & Paulie's BB18 roommate Corey Brooks.
♥ It was Corey himself who found himself in the spotlight in a hilarious way when he & Season 2 ex Jay Starrett had their beach workout crashed memorably last year by Bradley Cooper... all after their common ex, Morgan Willett, began seeing Johnny Bananas of The Challenge after their season.
♥ Someone who shared that Season 2 house with them was AYTO'er Malcolm Drummer, whose love triangle of him, Diandra Delgado & Nurys Mateo continued from NOLA, but the ladder was chosen by Cardi B. to star in her "Press" music video including that opening make-out session.
♥ The set of twin sisters who came onto Season 3 last year, Allie & Lexi Kaplan, also appeared on Dr. Phil last year, and also appeared on a spinoff series of E!'s Keeping Up With The Kardashians when they were asked by Scott Disick to paint a portrait of him & ex Kourtney's daughter Penelope.
♥ Before Peak of Love premiered last month, one of this current season's singles, Tyranny Todd, appeared on Bravo's reboot of 2000's guilty pleasure Blind Date before becoming the sixth member of her AYTO 5 cast to get a second chance at love after that infamous season.
♥ And we can't forget about Season 1's very first ex, Angela's ex Derrick Henry, where EOTB is one of four MTV shows he's done including Taylor & Tee's AYTO season and a few YouTube dating shows; Season 1 ex Charles Davis, a social media star along with girlfriend Alyssa Hyde; or original ex Marco Delvecchio, who starred in the music video of Camila Cabello's hit "Havana."

Now, you probably wonder why we viewers cannot have the same exact kind of experience watching these MTV shows the way we watch shows on Netflix, HBO or even YouTube. Since MTV is an ad-supported cable TV channel, it has several constituencies that it has to be faithful too: one of those are the viewers, which not only includes the channel's core audience of the combined demographics of adults 18-34 and teens 12-17, but thanks to recognizing the nostalgia of those who grew up with the channel, MTV added the broader adults 18-49 age group - which is the most important segment for advertisers to reach and to target with their commercials airing on these shows.
Some viewers who watch some of these MTV shows are actually younger than its target audience, and may not approve of the naughty behavior of these people that they get to bring to your living room. Cable networks aren't subject to the same kind of regulations as CBS and its competitors over on free-to-air, broadcast network television (Janet Jackson's MTV-produced Super Bowl halftime show or Julia Rose's World Series flash, for example). But nonetheless there are broadcast standards and practices MTV abides by, including employing censors who bleep out explicit language and blur out any nudity to please viewers and Madison Avenue.
But, thanks to one Instagram user by the name of @reality.lust, we can now let you enjoy and relive some of the biggest moments of Season 1 of Ex On The Beach USA in an uncensored manner, which follows below. A note of caution: the following embedded clips contain adult language & situations, explicit content, sexual references and violence... you wouldn't expect anything else for the wild drama that was the inaugural season of The Ultimate Relations-XXX Show. Enjoy...

Got something on your mind? Let us know! But please be mindful and do not post spam or negative comments (because of that all posts are now subject to the approval of the blogger, and this site reserves the right to disable these sections if we feel things are getting way out of hand).

Inside MTV Reality: Welcome Back to Are You The One? - Gone Global 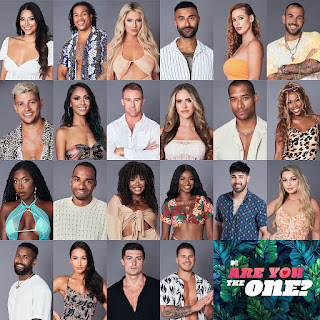 Got Thoughts? Join In @ #DCBLOG